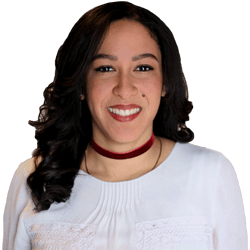 We know you can’t wait to get your hands on virtual reality. Ever wonder what goes into creating it? Hear from our intern Ciera Jones.

LT: Ciera, tell us about yourself and your time as an intern at LW?

CJ: I recently graduated from Rutgers with a double major in computer science and art. I’ve been an intern here since May. It was challenging and interesting right off the bat to work with virtual reality because we had no prior tutorials on it. We had to pick it up pretty quickly and do a lot of problem-solving.

LT: For someone who isn’t familiar with VR, how would you best describe it?

CJ: You are literally transported into an immersive experience because the “screens” are eliminated with the headset you use.

LT: How did virtual reality become an integral part of your research and experimentation this summer? Is it something that was originally on your radar?

CJ: I didn’t have any prior experience with virtual reality, but I did have some experience using Unity 3D, which is the software we used here. Unity 3D is a game engine and development tool that has everything needed to create a game. This is where all the code is put and compiled, and where the interactive space (or the game) is created.

“You are literally transported into an immersive experience”

LT: What went into creating VR and how long did it take you?

CJ: There were three major phases to the project. The first being that we were given the task of creating a VR game: building your own planet, exploring the possible routes to make this planet and how to use the software. The second phase included picking the route based on our research and creating the planet. The final phase was implementing the game’s distinctive style, making tweaks and making it user-friendly.

LT: You mentioned that you did some research in the second phase. What did that entail?

CJ: The research entails looking at previous examples of how people have experimented and done this before. This was one of my favorite parts because we got to play with it and test out the features that worked best. Looking down on the planet, creating and crafting it were fun learning experiences.

LT: What were some of the challenges and how did you overcome them?

CJ: A major challenge was to have the user paint on the planet and implement the code for it. Every object in a game should have something called a mesh and UV. A mesh are triangles arranged in 3D space used to render objects. UV is the process of mapping an image or a texture on the mesh. The code initially didn’t work because the model used didn’t have UV, making it nearly impossible to add the paint attribute. It’s like wrapping paper, and the goal is to wrap the model with the texture without any overlap. Eventually, we corrected the model and the scale was adjusted. We learned that so many parts to the game are dependent on numerical value. That hidden numerical value keeps the planet together.

CJ: It’s on the brink of being widely used by everyone, especially by consumers. Think of the cell phone being used in the 80s. Everyone has an interest because it’s a little more available and people can experiment with it.

CJ: People are discovering what the best application for VR is because there are also limitations; For example, the game we developed here had limited movements to prevent motion sickness. I think it’s a good visual communication tool. We’ve done a lot of work in the healthcare industry, and I can see this being used to show how a drug interacts with the body.

LT: Do you find VR to be useful or beneficial? How so and to whom? What do you think is the biggest downfall?

CJ: The downfall is going to be augmented reality, which is more integrated. VR is really close to your face, which can get tiring and cause motion sickness. I see it being successful for educational purposes and the entertainment industry, but not in the workplace. In the classroom, a child can use it as a supplement to better grasp a concept and be more engaged.

LT: If you could use VR in any capacity you wanted, what would you use it for?

CJ: To continue being creative, like building a planet and designing different models.

LT: Do you think consumers will eventually have a hand in creating their own virtual reality?

CJ: I think it’s possible for it to evolve into the consumer adding their touch of creativity.

LT: What are you most proud of regarding the VR project? What’s your biggest takeaway?

CJ: I enjoyed developing a deeper understanding of VR and being able to integrate what I learned in school. People may not realize it but it has a lot of moving parts. It’s a blend of physics, mathematics, figuring out how rotations work, making sure it’s user-friendly.

I’m glad I took this challenge. We had a great team who added their individual touches to the game from its 3D modeling to music. 7 Ways to Use Digital Communication Tools When Working Remotely 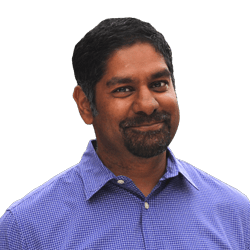 What Wireless VR Could Mean for People, Patients, and Businesses